Adventures of the curious

As most of you know, we (especially Mrs FOMOist) is not a huge fan of the cold. So when we discussed visiting cities in the land of the Vikings, one thing was clear – we were not going there in winter. The following observations might be sweeping generalising statements for Scandinavian nations, but here they are anyways:

Our first Scandinavian destination was Denmark’s capital city, Copenhagen. After arriving at the airport we took the train to our Airbnb flat which was walking distance from the Central Station (Københavns Hovedbanegård). As soon as we stepped out of the station, we realised that we were in the middle of the Red Light District. It didn’t feel threatening or unsafe at all but I was really hoping that we weren’t staying in the middle of it. After about 5 minutes of walking through scantily clad women and drunk-ish men, we entered the area called Vesterbro. If you do plan on visiting Copenhagen, the district of Vesterbro will be my recommendation for a centrally located, hipster neighbourhood. Everything we could wish for was within walking distance – the bike hire place, cafes with delicious coffee for breakfast and trendy restaurants. Some of the findings that had me go gaga over Copenhagen are: 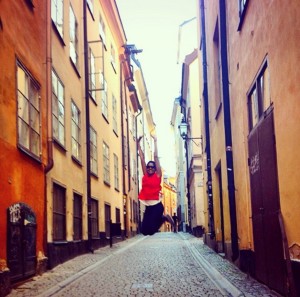 Finally, the most bizarre thing that I remember about Copenhagen was the Freetown Christiania. I am not sure how many people know about it or have visited it, but it’s basically a community of 850 residents that is not regulated by the Danish government and follow their own special law called the Christiania Law of 1989. We found out about this place online and rode our bikes to the posh neighbourhood of Christianshavn. After parking our bikes outside the “gated community” we entered and immediately were slapped in the face by the absurdity of the place. People with masks  selling hash (illegal in Denmark) from their tiny stalls. Signs outlined “No Photography” warning everywhere, huts made out of scrap metal and all sorts of waste. Mrs FOMOist and I are very open-minded but I have to admit this place made us quite uneasy so we left after I had my cup of takeaway coffee from one of the local Christiania shops.

After a quick rest in London, we then set off to our second Scandi destination of Stockholm, Sweden. Did I mention the people were beautiful? Yes, yes they were just as beautiful here with their beautiful blonde hair and strikingly blue eyes. Again we stayed at a trendy Airbnb flat, across the road from a subway station which worked in favour of our exploring souls (more on the subway later).

From the moment we landed in Stockholm, we fell in love. We still haven’t been able to decide what it is about this city but we could totally see ourselves living here (may be a bit of an exaggeration given how cold it gets in winter). The land of modern-day furnishing design kept us intrigued with the following:

Like Copenhagen, there was a bizarre twist to sightseeing in Stockholm as well. Not many people realise, but the Stockholm subway system is said to be the world’s longest art exhibit – 110 kilometers long. The link above has a list of the best ones you have to see to believe, but most of the stations have their own arty flair that makes the daily commute a rather cultural experience.

I’d like to end this blog with this beautiful thought…